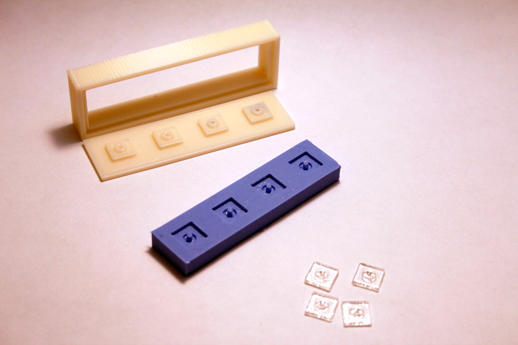 Building lab-on-chips often requires liquid ports on chips, either tube connectors for pressure driven flow or wells for pipetting down liquid into a capillary filling channel. This translates to a lot of extra work as standard 2D molding methods will merely create micro pattern on one side of your chip leaving the task to punch holes and attach an external connector on the other side. Gluing connectors can be tricky, and pre-made connectors can be very expensive. A good alternative is to produce your own connectors with OSTEMER, using the built-in epoxy glue to bond them during the second curing step to almost any types of chip surfaces.

The first step is to design your connector. This can be achieved using your favourite Computer-aided Drawing (CAD)-program and then mill or 3D print a template that you can use to make a silicone mould for the OSTEMER. You can even create the mould from an existing commercial fluidic port. In this example we have used a 3D printer to make a master for four very simple fluidic connectors that will fit standard PEEK 1/16″ tubing (topmost on the photo). Next, we used a silicone rubber to make a mould (blue) in which we could pour the OSTEMER and cure the first step under UV-light. The port was then demoulded, aligned to different chips surfaces and then cured in the oven to bond and stiffen the OSTEMER-polymer.

Using 3D printing, the rough surface can be improved with either acetone fumes or spraying with an acrylic coating to smoothen the surface. 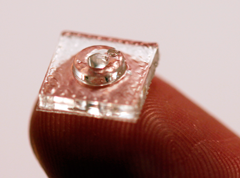 A connector in OSTEMER Crystal Clear, originally drawn in SolidWorks by Alexander Vastesson at KTH.

Note: the rough surface from the 3D printer is replicated.